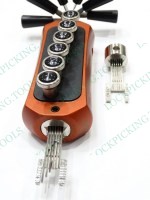 The decoder for pump Mottura is compatible with the first, second and third generation/

Text in the video:

This is a decoder for all generations of Mottura (1st,2nd,3rd). The kit comes with a small printed instruction manual. Now I will demonstrate a short video instruction. I'm not going to open it now because it will take time, 5 to 15 minutes. So I'll just show you the main points.

On the one side, the key has guides (this guide is visible in the lock). We insert the tool in the same way on the side of the guide.

Here the guide is at the top, respectively, insert the tool up.

Now we have the lowest third and it is on the seventh. So we raise it to the third and fix it.

We also fix the extremes. You need to fix them in the position that they are.

The extreme ones are clamped first. That is, we start decoding the lock from the extreme ones, first of all, since they are more clamped. And then we look at all the others.

We do tension in one direction. Check by pressing. We press. There is a backlash.

Let's pull on the other side. There is a backlash.

Let's check the sixth. It doesn't move. We do the tension in the other direction - it does not move.

So we move up one position and continue. Tension. Moves. On the other side, it moves. And so we check the rest - it moves, it moves. The one that we put up initially, you can not check it --- it`s put up already.

We do tension in the other direction.

Second. Pull out. Weaken the second and raise it by one division.

In this way, according clamped one, we raise and raise until the lock opens.

When working with the first generation, after each probing, you need to remove and insert the instrument.

The easiest to open is the second generation (the fastest), then comes the third. And the most difficult is first generation, since it takes a lot of time to pull out and insert after each probing.

This is the brief overview.

The price will be on the website. Link and phone number under the video.