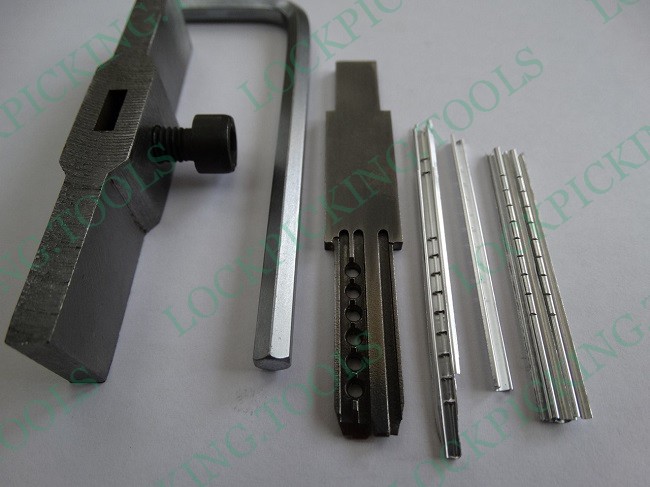 (Impression foil) for KALE 6 pins is made of high-quality steel.

Text in the video

These 2 locks have been bought today, completely new, in such boxes. The lockpicking tool for them is the same. By the way, there is a slight difference in size between the old and new locks. In old ones it can easily slip, and in new ones it can fit tightly. But it fits both the old and the new.

We mainly use 06 cut foil. In some cases, you can use 07, only in some. Here are 5 locks, here is another one in a vice. Of these five locks, 4 were opened. Rather, this one that did not open, it opened on the fifth attempt once using sheet foil 07, but the next attempts to open it again failed. Therefore, if the lock did not open, it makes sense to try to open it again and again, it may work.

Regarding all other locks, all of them open using 06 foil, successfully and quickly.

Pay attention, when we lay down the foil, do not press the height of the foil with our fingers. They put the foil down, rubbed your fingernail over it lightly and that's it. Make sure that this does not happen.

We take the next one. That is, sometimes it happens very quickly, sometimes slowly. But 90% of the locks in this series are opened with this pick and foil 06.

I press hard enough. Now there is anti-picking. Here I entered the lock, a backlash appeared and this means that it will no longer open.

On the other side there is a profile, you can also put it on this side, shape it and then transfer it to the working side. I try to press a little weaker. 5 seconds. Now it wedges a little.

Well, this can be said already opening, two turns.

So just like that, with these locks, one can get caught that will not open.

And you can also try foil with a different thickness.