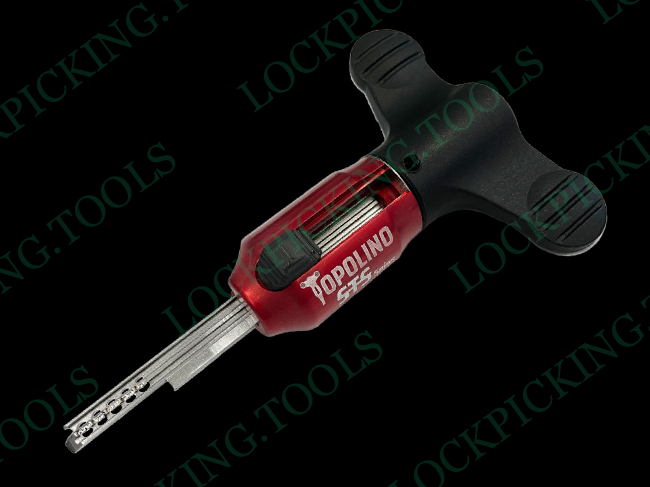 Text in the video:

What do I think about Topolino? I think it's just a great tool.

Regarding the percentage of successful openings, I dare to say that this is a 100% opening.

Of course, if you do everything right. This is one of the advantages of Topolino.

What other advantages does Topolino have? This is something that can be worked with relaxed hands, then the network goes very easily.

The disadvantages of topolino include the fact that it is not universal. For example, we take Topolino for Iseo R6, R6+.

This Topolino will not open R7, because there are pins up and down, so it is structurally impossible to make such a Topolino, at least for today.

The same goes for Cisa and Abus. Single-row Cisa / Abus works, double-row (where the pins are located up and down) - does not work.

In general, where there are pins up and down or also on the side - Topolino does not work. Today, it mostly works only with single-row cylinders.

And its price is also a minus, it costs much more than a standard foil impression tool.

There are, for example, such positions as Gerda H Plus or Securemme K2/K22, with these locks an impression pick with foil gives a 100% result.

That is, it is much cheaper and therefore it does not make sense to take the expensive Topolino for such locks. Unless, of course, you count money.

Here I have laid out those locks, for the opening of which the usual impression does not give 100 percent of the opening.

Cisa / Abus - when opening with foil, it gives only a 50% chance of opening, and when opening Topolino, I would say it gives 100%.

Even I have a cylinder like this, I marked it, as I tried to open it with impression foil many times, but nothing worked out for me.

With Topolino, I opened it in 30 seconds!

In general, I would recommend buying Topolino specifically for those locks with which there is no 100% when opening with the usual impression with foil.

About the work. Of the minuses, well, this is not such a minus, but when I took Topolino in my hands and started working,

and right in the process of work it became loose, even because of this it almost jammed in the lock.

The handle has come off the profile. It is attached here on two hexagons. Well, this could happen. I'm just telling it like it is.

Of course, I won’t say that this is a minus of the tool, and there are no questions for the person who invented this tool. This is a question for some company, the technical implementer of the product, this happens when some employee did not bother to work efficiently.

I understand this very well, I have experienced it myself. It's just that someone didn't tighten those two hexes properly.

But it's not scary, I corrected them and everything works fine. In general, in terms of quality, there are no questions for Topolino.

I also want to talk about manipulation. Insert into the lock and pull out of the lock - all this must be done with the curtain closed!

That is, in such a position. We insert the closed curtain - and when we want to pull it out, the curtain must be closed.

One more moment. In order not to damage anything, this is also important to remember. Two arrows, well, it's elementary, it shows how to put on a plastic nozzle. Arrow to arrow.

We expose the pins as in the impression. That's it, all the way. And this must be done with an open curtain! Necessarily!

You can forget it, for example, you took the tool, started working, you have a closed curtain and you start pressing these pins and thus damage this curtain!

Then you have to order a new one and change it.

By the way, all components can be bought separately if you break or bend something.

So, we always set the pins with the curtain open!

Now I will open something. Iseo. Open the curtain to expose the pins.

And about work. You must have watched other videos.

Yes, just a minute. We close the curtain. All Topolinos are divided here in half. The impression part from the part that makes the load are separate.

Here it is held on by a rubber band.

Before work, open the curtain.

You have probably watched other videos where they just press like this, I will now explain so that you understand.

We do tension. This is the part where tension can be applied. After that, we press the impression part to extrude / print the drawing.

That is, of course, this can be done randomly, somehow, right or left, the lock will most likely open.

But it's important that you understand how it all works.

That is, first we make a tightness, then we press the impression part. But even with such work, most likely the lock will open and everything will be fine.

The Topolino, just like the Impression, has pins, and while new it has more rigidity than when it was already used.

Accordingly, when you open the 10th or 20th time, these pins will be softer.

And since they are softer, they will shrink faster, respectively, the openings will be faster.

Well, it also depends on the intensity of pressing.

Another such moment. Abus D6 and Cisa Asix. Topolino is sold in the original version.

I changed the original Topolino a little and now the tool that I have works with both Cisa Asix and Abus D6.

That's all for now. Later I will shoot separate videos for all Topolino, but for now I have told the main points.